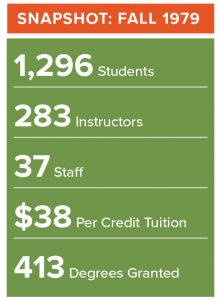 In late summer 1970, Governor Deane Davis charges a special commission with finding a way to deliver postsecondary education to Vermonters in their local communities.

That fall, a handful of people in a single, cramped office in Montpelier offer a menu of ten courses. In these earliest years, students are not charged tuition and instructors do not receive pay. Idealism, energy, and zeal are the order of the day.

An experiment from the beginning, CCV is Vermont’s innovative response to a gap in access to education. CCV makes it possible for people to continue their education—people who might have been discouraged in the past by high tuition costs, distance from campuses, family or job responsibilities, and limiting admissions policies. CCV utilizes resources already available in Vermont communities, holding classes in schools, offices, banks, churches, and even the local hardware store. CCV instructors are also members of the local community, often with full-time jobs practicing the skills they teach.

CCV places its greatest emphasis on the student. Through its field offices located around the state, the College brings courses into Vermont communities, designing classes to meet student needs. Through low tuition, flexible class hours, open admissions, and the use of existing resources, CCV brings new opportunities to thousands of Vermonters previously excluded from postsecondary education. When the College is threatened with closure in 1979, a groundswell of grassroots support led by students, along with faculty and staff, saves CCV. Bruised but not beaten, CCV looks ahead while holding on to its founding principles and unique educational philosophy.