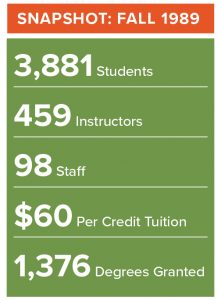 A newly reorganized CCV sets its sights on improved academic credibility, financial stability, and greater community visibility. CCV is awarded its first major grants from the U. S. Department of Education, and in 1982, is re-accredited for 10 years by the New England Association of Schools and Colleges.CCV experiences a growth spurt under the leadership of Ken Kalb, its third president. Over the course of the decade, enrollment more than doubles and only UVM enrolls more students. CCV is the second largest college in the state and the student population begins to shift to a greater number of degree-seeking students. CCV continues to expand into all corners of the state by adding six locations, bringing CCV within 25 miles of 95% of Vermonters.

At the beginning of the decade, the College operates as a loose confederation of local offices, each creating its own course list and marketing materials. But by the end of the 1980s, CCV has truly become one college with standard course offerings and a centralized Academic Review Board.

With its academic and organizational foundation in place, and remaining true to its student-centered approach to teaching and learning, CCV is poised to take on the Information Age in the years ahead.